Some notes after completing Nono Pixie

Nono Pixie is done and I don't really need to change or add anything to it. Not that it would be hard to add more puzzles, they can be appended to the end of the code file and then increment the byte at the start of all the puzzles. 100 puzzles feels like a good number.

Why make new games for the Commodore 64?

Just in case anyone who isn't already living a retro computer games lifestyle stumbles into this post, I can offer something of an explanation. My day job is making games and an engine for all the current platforms and I have a lot of projects I want to try out on my own that doesn't quite fit with my job so I do them in my spare time!

For me, the easiest platform to do these projects on is the C64. To set up a screen at a given address you just need to set 5-6 bytes and you can get started on the game! Don't get me started on trying the same thing with Vulkan.

Nono Pixie started with participating in a twitter thread:

Which made me decide to implement a Nonogram game on a Commodore 64 within a weekend! 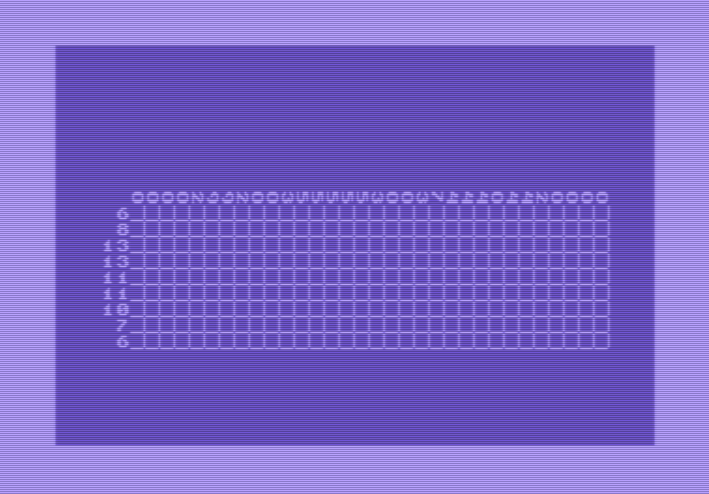 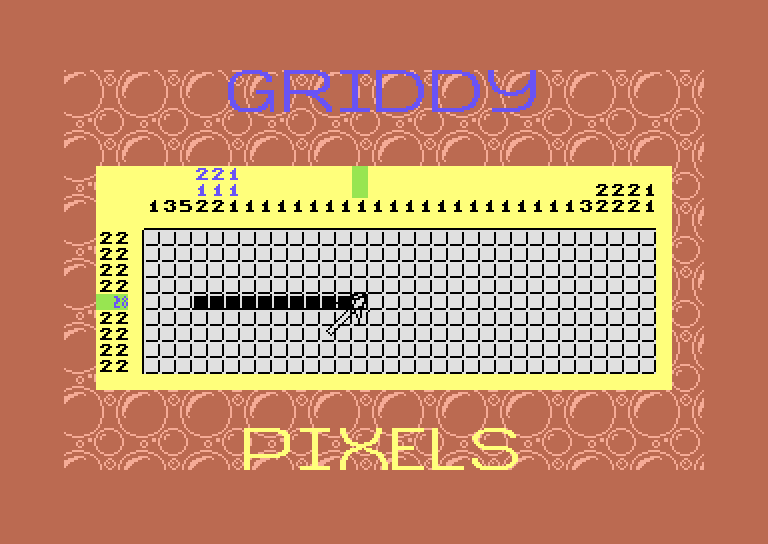 Progress in one weekend

I'm feeling pretty good with what I could complete in just a couple of days! This is the initial version released on itch.io so the game was started on Saturday morning and released on Monday.

Since the game came together so fast and players might have really great ideas about how to extend it I decide to release the game in an Early Access style where the game gets a lot of releases and I can erase the old ones from existence. Sounds great in theory but given the C64 scene things got a little awkward... 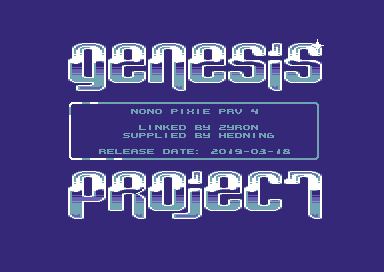 So turns out once something is released on the C64 scene it gets repackaged and archived forever by the various groups. I think it is great that the game reaches more people but my release plan is kind of messed up. I also got far more feedback from just sending the game to friends to check out than I did from releasing the game early. I got a few really good suggestions that I implemented over time but nowhere near my friends! So overall I don't think it was worth releasing the game early and often.

After initially releasing the game I get a message from someone on the ZZap64 annual team asking if the game will be done soon, which I find entirely confusing because it didn't exist just a few days ago. Is one weekend a long time working on a released C64 game?

Turns out I've not been very original with the name! The twitter thread that inspired me in the first place has a screenshot of another nearly complete, but not released, Nonogram game called Grid Pix which has confused everyone. The lesson learned here is that I can make a new C64 game in a weekend but I should spend more time than that researching the title! So keeping with the silliness of the original title I settled on Nono Pixie instead.

A number of puzzles didn't end up in the game because they were too hard or impossible to solve. I eventually figured out that having a lot of clear pixels in the grid makes the puzzles harder. More pixels means it is easier to figure out where at least some of them should go! 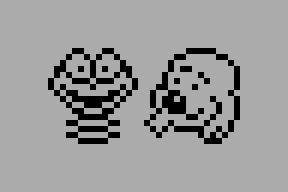 There were a lot more discarded puzzles but these interpretations of Thing of a Spring and Head over Heels were particularly disappointing omissions.

The initial take on joystick input was to have the stick emulate a mouse cursor with acceleration and then a square indicator to indicate which grid cell is currently pointed at. This was a terrible idea! 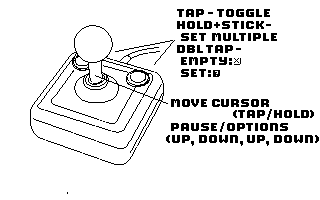 At this point I hadn't even thought about adding actual mouse input, so while switching to stepping the cursor by tapping the joystick I realized I could still use the mouse style cursor with an actual mouse. I didn't have a real C= 1351 mouse to test with and using an emulated PC mouse is a completely different experience.  Luckily I had friends that could help me get the mouse controls just right! Just after I completed the game I won an eBay auction and could try it for myself, and I'm really happy with how it turned out. 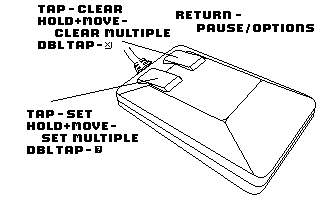 I tend to not think about music until later in the project, luckily I have friends to remind me! So when a friend suggested Psych858o create the music I took a listen to his work and it was a great fit!  You can check out his other SID music in a browser here:

There is not enough room on the 16kb cartridge version to fit a digital manual, but since I was making a floppy disk version anyway, why not? Manuals are exhausting to write. Thanks to some proofreading by friends it is hopefully mildly helpful for those who haven't played a Nonogram puzzle game before! I may have drawn the manual font a bit too small which makes it harder to read but there is a lot of information that is needed on each page. 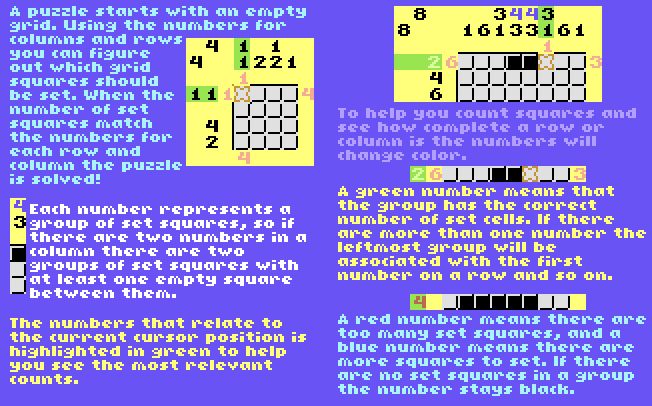 The primary target for balancing Nono Pixie was difficulty progression, or making sure the puzzles gets harder and harder if you start from the beginning. After creating a decent number of puzzles I kept trying to reason about the order but I ended up just playing the puzzles over and over to determine which was harder. I did end up cutting a bunch of puzzles that were ambiguous or not solvable without some guessing so there was a bit of one step forward and then starting over.

Eventually I settled on measuring how long it took me to solve each puzzle, but as I kept playing I also got better at solving them. So in the end I played all the puzzles in order and compared with earlier timing for each puzzle to make sure I had good numbers to sort with. My total playthrough time is just under 9 hours for all puzzles together, so it took nearly a week to get the final timing.

In addition to the puzzles there was also quite a bit of iteration on the controls, like adding repeat stepping if holding the joystick in a direction, double tapping fire to set known empty / uncertain set, including adding a bug to the mouse code right at the end and only realizing it when I received my new old mouse from the eBay listing just before the nearly final version! After having tested the game over and over one of the last additions was playing the puzzles in random order.

Even if I did a lot of the work I had plenty of help from friends, from giving me some feedback for the mouse input, to cracker groups telling me to look at an NTSC bug. Martin Roscher (Logiker) provided lots of feedback and suggested the speed keyboard controls (hold C= or CTRL and hit a number to fill multiple squares vertically or horizontally). And Psych858o for the music, and everyone that gave the game a try before it was complete! And  C64 CUSTOMS for suggesting more c64 picross games,  and RGCD for having a game jam going I could join to get more people looking at the game! And everyone else that plays the game :)

After deciding on the new name without really intending it to be meaningful it made me think about it more. Since the game was supposed to fit on a 16kb cartridge I didn't plan for a title screen but just to relax I started painting it.

I have plenty of space left on the floppy disk version so why not add it there? So I finished the picture! 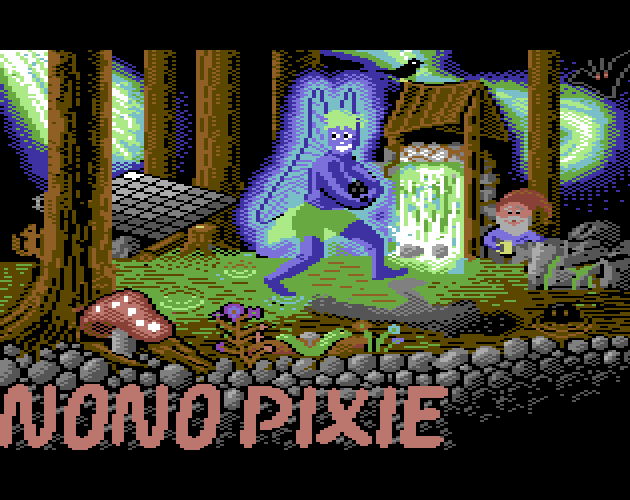 Apologies for adding this section after I initially published this article but I completely forgot that there was already some mentions of Nono Pixie already! I am guessing there will be more updates after the conclusion of the RGCD game jam on July 1st 2019.

Indie Retro News made a nice write-up when the game launched! 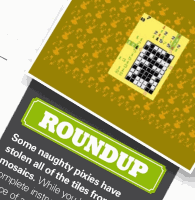 I was delighted to notice a mention of Nono Pixie in Old Retro Gamer issue 194, which in spite of detailing another Nonogram/picross game fails to mention the type of game, but a really nice surprise!

Vandalism 69 is a disk mag and primarily focuses on the quality and uniqueness of the aspect of pirating games but also includes some details about the games. I'm happy to be included as Space Moguls, by name and by scene handle! It is just a little strange because of my early access style release plan I get mentioned so many times :) Also thanks for giving Space Moguls (the game) a nice push!

(this section might be updated if I find anything else)